Unemployment in America remains one of the country’s more pressing issues. Along with health care, crime rates, and global warming, there is more than enough for their government to worry about.

Thankfully, solar energy provides help for three of the four problems I just listed.
The future of our planet is of great concern to many, but with technological breakthroughs like this, it gives even a small glimpse of hope to even the most desperately hopeless individuals.
Let’s dive into the many advantages that solar energy brings to our world.
1.Solar power helps fight global warming
In 2015, the United States generated about 4 trillion kilowatthours of electricity.1  About 67% of the electricity generated was from fossil fuels (coal, natural gas, and petroleum). It isn’t difficult to imagine the damaging effects this kind of energy consumption is having on our planet. Pumping this many toxins into the air impacts our planet on many levels and solar energy helps put an end to this air pollution.
2. The solar industry creates many jobs
In the U.S., solar energy remains one of the best job creators in the country. According to the University of Massachusetts, for every one million dollars pumped into solar energy efforts, there are 14 jobs created. This is more than the natural gas and coal industries combined. In a time where job creation is scarce, this could help stabilize America’s economy in the long run.
3. For owners, solar power saves you money (long term)
With solar energy, everything is long term. The reason why it isn’t the main form of energy production is because it doesn’t create energy as fast as coal or petroleum. However, for solar owners, it saves you a nice chunk of money over a period of time. Depending on how much sunlight your area gets on average, solar owners can expect to rake in $20,000 on a twenty year investment if they live in New York, $30,000 if you live in California or Florida, and a staggering $65,000 if you live in Hawaii. Putting solar panels on your home will soon be a popular trend and will take over the way neighbourhoods look because it is good for the environment, and makes you money. Now how many energy sources can say that without the need to put a fifty foot windmill on your front lawn?
4. Solar energy is renewable and sustainable
We have a sun. The sun shines several hours a day. We can harvest the sun’s energy. The sun won’t burn out for another four billion years. Needless to say, solar energy is here to stay for the long run (well, at least until the sun burns out) because it is one of the most sustainable and renewable energy sources on the planet.
There are large scale solar operations around the world that have solar farms take up acres of land. The largest of these farms will generate enough electricity in one year to power 320,000 homes. (seen below)
China is helping Afghanistan build this massive solar project, and we can be sure to see many more of these in the near future.
Solar energy is here to stay. It creates a boat load of jobs, and helps fight climate change, all while cleaning the air we breathe as the dependance on fossil fuels lowers. 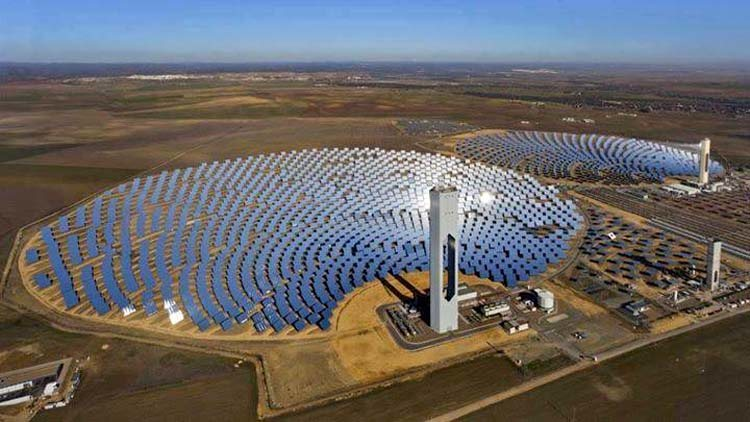