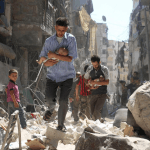 Aleppo, Syria
A historic city, torn apart by years of relentless civil war; The worst humanitarian crisis in recent years is being referred to as the “modern-day Stalingrad,” Here’s why

The battle of Aleppo is the most important component of the ongoing Syrian civil war; Here, a faceoff between the Assad government and the Syrian Rebel forces is in full-swing, and the city, in ruins.
In 2011, Aleppo was Syria’s largest city with a population of 2.5 million people. A UNESCO World Heritage Site, it has been described by Time as Syria’s commercial capital. Tension within Syria has been building up since protests against the Assad government began as early as March 2011. In Aleppo itself, large protests began more than a year later in May 2012, and controversy has escalated ever since.
Conflict first arises when rebel fighters from neighbouring villages converged on the Syrian hub to aid in protests, to which the government responded with heavy-handed, ill-advised bombardments of the city.
At the beginning of the Battle of Aleppo, rebels reportedly had between 6,000 and 7,000 fighters in 18 battalions. The largest rebel group was the al-Tawhid Brigade and the most prominent were the Free Syrian Army, largely composed of army defectors. Most of the rebels came from the Aleppo countryside and from towns including Al-Bab, Marea, Azaz, Tel Rifaat and Manbij.
Before we dive into specifics, we must not get the Rebel groups confused with the Islamic State (ISIS). These are two different groups, fighting for two different reasons. ISIS currently has no interests in the region, their strategy lies in controlling the North-Western oil pipelines that stretch from Iran to Turkey – something I explain in further detail here.

Course of the Battle

The course of the Syrian war in whole has taken a drastic change in recent years, so much so that the entire country is being disputed amongst four separate armies. In the case of Aleppo, real battles began in July of 2012 and has escalated to a point where today, it is being considered one of the worst humanitarian crises’ since the Vietnam war.
A breakdown of the battle:
2012: Initial rebel attack and capture of Eastern Aleppo
Free Syrian army engages on an offensive attack in Aleppo in July and early August. Many casualties suffered. Rebel commanders said their main aim was to capture the city center. Rebels secured a strategic checkpoint in the town of Anadan just north of Aleppo, as well as capturing Al-bab, an army base northeast of the city. During this time, rebels targeted security centers and police stations in an attempt to cripple the Syrian hub.
2013: Advances and counter-advances
After multiple attacks on Aleppo International Airport, all flights were suspended on 1 January 2013. The following month, the rebels seized Umayyad Mosque; and during the battle, the mosque’s museum caught fire and its ceiling collapsed.On June 9th, the Syrian Army announced the start of “Operation Northern Storm”, an attempt to recapture territory in and around the city.Between 7 and 14 June, army troops, government militiamen and Hezbollah fighters launched the operation. Over a one-week period, government forces advanced in the city and the countryside, pushing back the rebels. However, according to an opposition activist, on 14 June the situation started reversing after rebels halted an armored reinforcement column from Aleppo that was heading for two Shiite villages northwest of the city.
2014: Syrian Government Encircles Rebels
Government forces, having lifted the siege of Aleppo in October 2013, continued their offensive in 2014 (we see this in the diagram to the right, government forces are highlighted in green). This culminated in the capture of the Sheikh Najjar industrial district north of Aleppo and the lifting of the siege of Alep 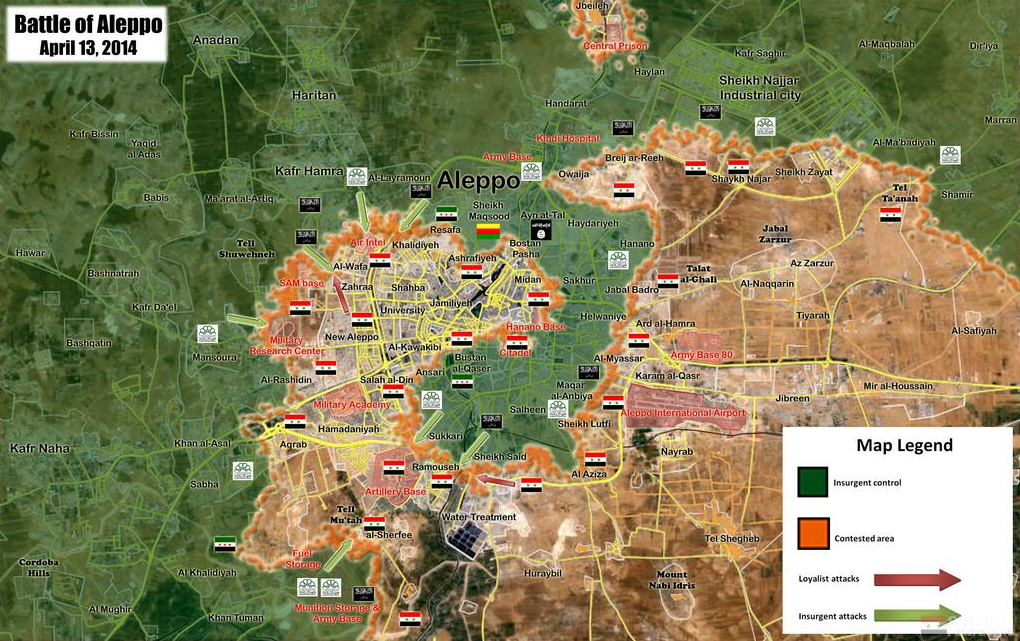 po Central Prison on 22 May 2014, which contained a garrison of government soldiers that had resisted rebel forces since 2012. A ceasefire proposal was presented by a UN envoy in November; under the proposal, the Syrian Arab Army would allow the rebels to leave Aleppo without violence and would help with their transportation. In return, the rebels would surrender their arms. President Assad reportedly agreed to consider taking this ceasefire plan, though no official confirmation was made. The FSA rejected the plan; its military commander Zaher al-Saket said they had “learned not to trust the Assad regime because they are cunning and only want to buy time”.
2015: War of Attrition
In preparation for a new offensive, the rebels heavily shelled government-held parts of Aleppo, leaving 43 civilians dead and 190 wounded on 15 June.On 17 June, rebel forces captured the western neighborhood of Rashideen from Syrian government forces.Throughout 19 and 20 June, a new round of rebel shelling killed 19 more civilians.In early July, two rebel coalitions launched an offensive against the government-held western half of the city.During five days of fighting, the rebels seized the Scientific Research Center on Aleppo’s western outskirts, which was being used as a military barracks. Two rebel attacks on the Jamiyat al-Zahra area were repelled. Government forces launched an unsuccessful counter-attack against the Scientific Research Center.
2016: Civilian and Rebel Supply Lines Cut By Assad Regime
By 2016, it was estimated that the population of rebel-held Eastern Aleppo had been reduced to 300,000, while 1.5 million were living in government-held Western Aleppo.
By late July, the military had managed to sever the last rebel supply line coming from the north and completely surround Aleppo. However, within days, the rebels launched a large-scale counter-attack south of Aleppo in an attempt to both open a new supply line into rebel-held parts of the city and cut-off the government-held side. The whole campaign, including both the Army’s offensive and subsequent rebel counteroffensive, was seen by both sides as possibly deciding the fate of the entire war.
Rebels started an attack on western Aleppo in late October, which failed, with government forces retaking areas in the southwest which they had lost to the rebel’s late July offensive. The Syrian Army then started an offensive to finish rebel-held Aleppo once and for all. In which they captured the Hanano district, Sakhour district, Jabal Badro district, Bustan al-Basha district, Hellok district, Sheikh Kheder district, Sheikh Fares district Haydariyah district, Ayn al-Tal industrial district and reportedly the research housing south of Jabal Badro. They also captured the Ard’ Al Hamra district cutting rebel-held territory in Aleppo by 40–45%.By the 13 December 2016, the rebel area shrunk to only 5% of the original territory of the city. A ceasefire was announced and the fighting stopped in order to enable the evacuation of civilians and rebels. The buses were prepared for the evacuation. However, the Syrian government resumed the bombardment of east Aleppo again on the 14 December. The deal thus fell apart, with both sides blaming the other for the resumed fighting.

Syria has effectively turned into a Proxy war, in which American-backed rebels, stand against the Russian-backed Syrian government. Aleppo is the most prominent example of this. What started off as peaceful protests have now developed into a full-fledged civil war, and the city of Aleppo has been left in ruins while opposing forces continue to fight. 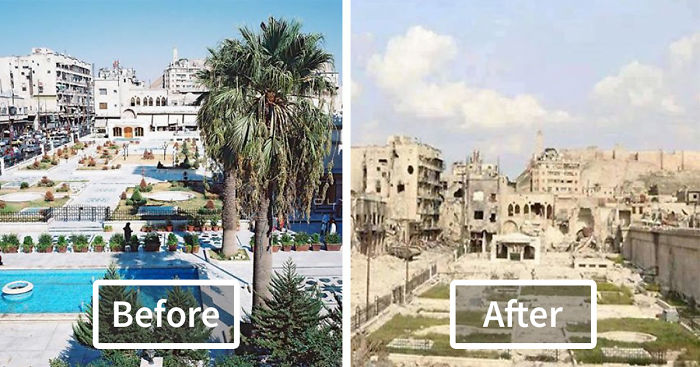 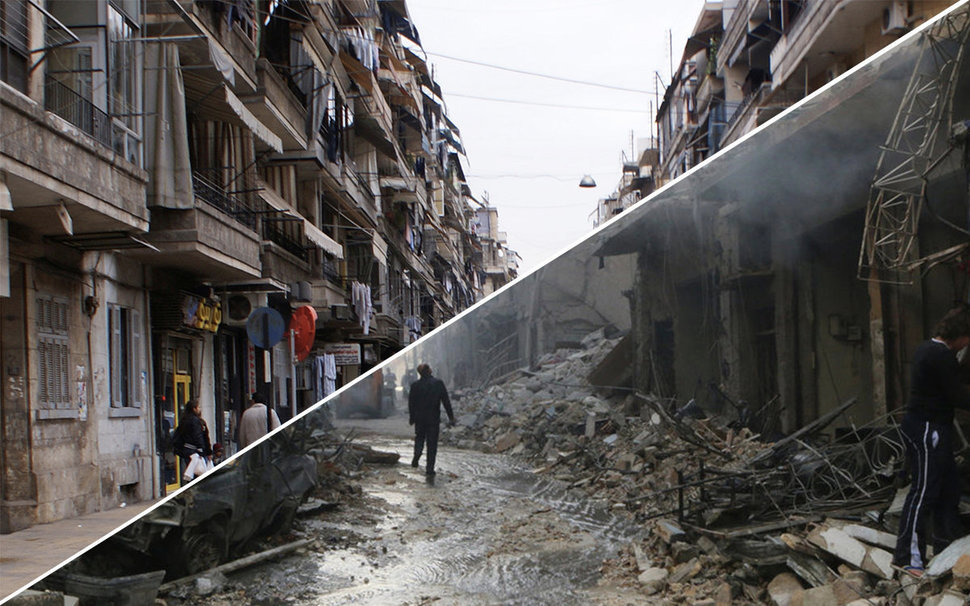 Evacuations began for thousands of civilians and rebels from Syria’s eastern Aleppo on Thursday, but for many, fleeing their homes means leaving one war zone for another.Most of the civilians will be taken to the rebel-controlled area in the neighboring province of Idlib, one of the few remaining footholds rebel groups still have in the country — and most likely the regime’s next target for recapture. Rebel fighters were also being allowed to move there. Approximately 3,000 people and more than 40 wounded were brought out of eastern Aleppo during the first two evacuations on Thursday, the head of the International Committee of the Red Cross in Syria, Marianne Gasser, said in a statement.
Secretary of State for the U.S, John Kerry rebuked the Syrian Assad regime for carrying out “nothing short of a massacre” in Aleppo, as tens of thousands of civilians were held in the recent siege of the rebel stronghold.
Mr.Kerry is completely right. The violence within Aleppo and the general lack of restraint towards anyone within firing range are horrific. Hospitals in Aleppo that house the elderly, sick, and children, have now all been bombed by either the Assad regime or the Free Syrian Army, among others. Neither side is showing restraint, and thousands continue to die because of this.
“There is absolutely no justification whatsoever for the indiscriminate and savage brutality against civilians shows by the regime and by its Russian and Iranian allies over the past few weeks and, indeed, over the past five years,” John Kerry said at a press briefing on Thursday.
According to a tweet from Syrian English teacher, Abdulkafi Alhamdo, “We are [given] only two deadly choices: Death or displacement. Both of them are heartbreaking,” Aleppo citizens (what’s rest of them) are being sent to refugee camps with minimal access to food, water, and shelter – all because of an unjustified uprising against the Assad government.
The conflict in Syria, and specifically, Aleppo, has reached the point where it can indeed be called a “humanitarian crisis.” The lack of cooperation from either side in conflict demonstrates the sheer lack of care for the Syrian people. Neither the Assad regime nor the Free Syrian Army seems to care about the well-being of innocent civilians. The situation is so bad, it has even been compared to the modern day “Stalingrad.”
Despite this, Aleppo residents will be allowed to leave on Thursday under a new ceasefire agreement reached overnight. However, it is estimated that over 50,000 civilians still remain inside Eastern Aleppo under rebel control.
Some news outlets have even gone so far as to say the violence has ‘ended’ in Aleppo. To the contrary, I don’t think the violence in this area will cease until rebel groups completely back out of the area and release those civilians.
At this point, however, it seems that the Assad regime has won this battle against the Free Syrian army, and Syria itself, is one step closer to ending this brutal civil war.
Facebook Comments

A Breakdown of the Ukraine-Russian Conflict