Researcher interested in political economy, public policy, international relations, and…pretty much everything in that ballpark.You can find more of my work at christinalafleur.wordpress.com.

China’s investment in extractive industry in Latin America illustrates the strength of China’s economic and diplomatic reach, and the extensive implications it may have for Latin America.  China has the opportunity to lead in extractive industry and in international governance.  For Latin America, the exchange highlights global debates: between foreign investment and local empowerment, national government and local consequences, international opinion and national choice, indigenous rights and land ownership, legal and illegal protest…all fueled and complicated by foreign mining industry.

57.53% of Chinese Latin American investments are in energy.  Reflecting on the opening of Mexico’s energy sector to foreign investment, ICIS China energy research director Li Li said, “…foreign companies, including the Chinese State-owned companies…will have more development opportunities and a more comprehensive strategic layout in South America….” Latin Americans see the potential, but also the risks.  On a stakeholder survey, 75% Latin Americans were “very familiar” with the mining industry.   As for benefits, Latin Americans were most likely to point to contributions to the host’s national economy.  43% called it a “significant economic actor with impacts that can be minimized and/or mitigated.” But Latin America was second most likely, among 6 regions, to see mining as low value to society.  Their chief concerns were water usage (31%), governance/regulations (26%), environmental concerns (24%),  social concerns/legacy issues/public image (22%), and community engagement (17%).

In 2014 the countries with the most active mining disputes were Mexico, Peru, and Chile, with around 35 each, and the Catholic Church has played a role.  The Churches and Mining Network brings together church leaders from 15 countries looking for mega-mining alternatives.  The Canadian Conference of Catholic Bishops wrote a letter to the prime minister seeking more regulation for Canadian mining companies abroad, especially Latin America.  The Pope himself, in his encyclical letter “Laudato Si:  On Care for Our Common Home,” brought up the issues of indigenous rights, water, and inequality with regards to mining projects.

A February 2017 IMF working paper evaluates the impact of hydrocarbon extraction on Latin American economies:  GDP grows 3-5 years after discovery, and the current and fiscal balance are positive after a few years.  In Bolivia 2001-2012, poverty fell and manufacturing/construction employment increased in mining and gas municipalities. Chinese business has generated at least 1.8 million jobs in Latin America and the Caribbean  (LAC) between 1990 and 2016, 4% of jobs created.

In addition, Chinese loans have been parceled out to almost a dozen LAC countries, 70.82% in energy. While that investment can be used for national advancement, the inability to repay debts is a risk to the economic and political infrastructure of the country in question.

At the same time, emerging American isolationism, exemplified by the President’s threat to end North American Free Trade Agreement, pushes economic competitors like China and Mexico together. At the BRICS summit, Mexican President Nieto looked forward to contributing to the dialogue on South-South cooperation, development, trade, and the eradication of poverty.  Those priorities illustrate the scope of the Chinese vision, the marketed intellectual, cooperative product if you come to the Chinese side of the table.

The US also withdrew from the Paris Climate Accord.  On the other hand, the Chinese 13th Five Year Plan prioritizes higher value-added industry but makes room for “green mining,” intended to reduce the environmental impact of extraction and part of a general push towards investment in green projects and financing.  Critics, however, point out the country’s lackluster history with labor and environmental rights and standards.

Promisingly, the 2016 EITI Secretariat report found Chinese companies generally cooperative with EITI countries around the world.  At home, the Chinese government has begun to target mine safety by improving legislation, inspections, and closing small mines.  These could indicate coming changes for all Chinese extraction corporations.

Better regulations could help address the problem of protests in Latin America. “Socio-political and community risks” delays cost mining companies up to $20 billion a week.  Decisions to limit investment can have consequences.  They could scare off new investors in other industries. While the recent El Salvador ban on mining is intended to protect citizens and their water, native artisanal miners are now on the way out of a way of life.  An alternative to a ban could be strict penalties for violating regulations, it would require strong political infrastructure.

Latin American citizens may not trust their governments to make those decisions.  On the annual Global Shapers Survey, the 6,699 Latin American and Caribbean youth distrusted institutions to a generational extreme.  78% said the most frustrating thing about government leaders was corruption- versus 51.6% globally.  65.3% said government accountability/corruption was the biggest problem facing their country.

For Latin America, the rhetorical push towards green mining, international safety standards, and internal regulations could mark the start of Chinese government pressure on Chinese industry to adhere to higher standards, addressing the root of many protests against mining projects in the region.  However, it will all depend on enforcement and continued reform, and China isn’t the only player in the region.  For the region to fully reap the benefits of investment, it will need to better regulate, supervise, and enforce.

Regardless, China is in Latin America to stay. Latin American countries and China have forged solid, multilayered trans-Pacific bonds, and extractive industry plays a major role in how they interact and hope to achieve their goals.

For further sources and a more extensive report, you can check out “Chinese Extractive Industry in Latin America Today: An Update” at christinalafleur.wordpress.com

Healing in a Blockade Context 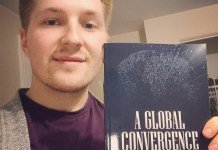 A Global Convergence: My First Book