May 23, 2017 In Economics International Economics

Imagine a country whose inhabitants work fewer hours than almost any others, whose workforce is not particularly productive and whose children spend less time at school than most of its neighbours.  Hardly a recipe for economic success, you might think.

One reason for this, says David Kohl, deputy chief economist at Frankfurt-based Julius Baer bank, is that real interest rates in Germany remained stable, unlike those in other European economies.

“In the UK, Italy, Spain and Portugal, for example, higher inflation meant real rates moved down, so there was a huge incentive to borrow money,” he says.

After Mr Trump casually threatened to slap a 35% tariff on imported BMWs, he has Germanys’ full attention. His raving assaults on the rules-based trading order, along with his disdain for NATO and the European Union, strike at the heart of post-war Germany’s identity and national interest, which is to be embedded in Europe and the West as a peaceful mercantile nation. But if Mr Trump thinks the angst he is causing gives him bargaining power over Germany, he is naive.

Germany. With a prospering economy and constant GDP growth, Germany is prospering. Suffering the aftermath of World War 2, I think this country has allot to offer and has come a very long way. WHAT stubborn timing. In February Germany informed the world that they had the largest current-account surplus, of about €270bn (almost $300bn), beating even China. Meanwhile, the nation with the world’s biggest deficit remains America, which under its new president, Donald Trump. Mr Trump’s economic adviser, Peter Navarro, has even accused Germany of currency manipulation. By his logic, Germ 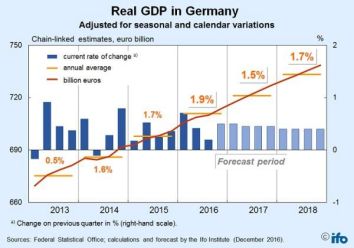 any “exploits” America and others because it uses the euro, which is weaker today than the old Deutschmark would be, making German cars, machines and other exports more competitive.

His administration’s mistake is to attack Germany with flawed logic. Yes, the euro is weak relative to the dollar. But so are other currencies. Germans think Mr Trump has only himself to blame. He has promised huge tax cuts and increases in infrastructure spending, which will drive up interest rates in America, boosting the dollar. Mr Navarro’s suggestion that Germany deliberately attempts to weaken the euro makes no sense. The European Central Bank (ECB) may be based in Frankfurt. But its president, Mario Draghi, is keeping interest rates near zero and buying bonds (in the European version of “quantitative easing”) primarily to stimulate economies outside Germany.

How to stimulate economic growth.

There are two main aspects to economic growth:

Growth in productive capacity (AS) occurs because of:

However demand can fall especially if there is uncertainty in economies. This happened in the UK because:

Demand can become weak as a consequence because of:

Investing in the right areas (e.g. education, transport and technology) would provide some short-term boost to demand. Also, if the investment (from private and public sector) was very successful and actually increased productivity growth, then it may also lift the UK’s long run trend rate of economic growth, and in future decades, the long run trend rate could be 3% rather than 2.5%. But, now the immediate problem is lack of demand. This lack of demand and deflationary pressure is harming long term growth prospects.

The other factor is that Germans, in an ageing society, have for years been saving much more than they invest. Individuals are filling piggy banks for their retirement. And firms, expecting lower returns from older, smaller populations in the future, are investing abroad instead of at home. At the same time, the government, also citing demography, in 2011 adopted a “debt brake”, limiting its new borrowing at just the moment when ultra-low interest rates would make debt service almost free. The resulting excess savings are capital that Germany sends abroad. They are the corollary of Germany’s current-account surpluses.

Read More  A Breakdown of the Ukraine-Russian Conflict 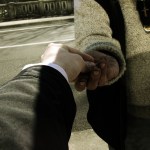 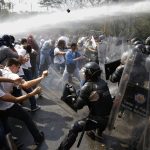 Does A Faltering Economy Promote Radicalism?
May 26, 2017
Understanding The Importance Of Globalization
May 26, 2017
© Copyright The Global Millennial - All Rights Reserved
%d bloggers like this: