Home Economics How Does a Poor Country Become Rich?

So how does a poor country actually become wealthy? Well, it has to start from the bottom up.
Poor countries are poor because they have nothing to offer the global market – these days, most countries must be globalized in some way in order to stay afloat, so becoming economically viable on an international level is essential for any third world nation to rise up financially.
But how is this accomplished? What must the government and the people of a poor country do to reach a greater level of wealth?

Lack of Corruption In Institutes
For a country to become rich, they must have reliable institutes. These include jails, courts, banks, and government – if people are easy corrupted in these institutions, it is nearly impossible to truly serve justice to the people being governed under them. If people of a nation are not being fairly treated by those in authority over them, the entire structure (from the citizens to the president) will fail to reach any form of prosperity because people don’t believe in the structure, and they won’t want to make personal sacrifices for the overall betterment of the nation.
Educated, Capable Labour Force
If you were to compare education standards and capable labour forces in predominantly poor countries, you would find a positive correlation. If you have generation after generation growing up with inadequate education and then going into the workforce with a lack of skills and knowledge to perform basic tasks, the labour force will have severely high levels of unemployment.
A country cannot become wealthy if there is no solid educational reform or workforce structure in place. Without these, citizens cannot bring home decent salaries that are needed to pay taxes that in turn, aid educational development.
According to statistics from InfoPlease, and The Richest news, the poorest countries on the planet as of 2015 also share the lowest scores in educational systems, with the lowest being in Niger, which boasted a 0.528 EDI. It seems obvious to point out, but a quick look at the comparison between education and wealth proves that any successful country has built its success from the bottom up – and that begins from enlightening your youth.
High-Grade Infrastructure And Telecommunications
If you take a look at any developed country today such as the U.S., Canada, the United Kingdom, or Australia, all have a high-grade infrastructure and well-developed telecommunications databases.
Infrastructure that includes roads, highways, buildings such as hospitals, and power supplies are all needed in order for a country and its economy to operate effectively. Think about it, without roads, goods can’t be transported efficiently across the country, and without energy, buildings such as hospitals aren’t operable.
Military, Security, Law and Order
Military is arguably the least important aspect for a developing nation, as during this stage there is less threat of invasion as opposed to a developed country. Furthermore, the United States has the largest and most globally-recognized military in the history of our species, and are more than willing to provide military assistance to countries under invasion. Thus, when in the stage of developing infrastructure and an operable economy, a military should not be a top priority – but it should be on the minds of leaders.
Aside from this, having domestic security is essential for any country to reach greater prosperity. Poor countries are much more likely to have internal crime problems than rich countries because there is a lack of law and order due to the ease of corruption. If Cartel owners can offer police officers triple their yearly salary to let them continue illegal activities, can you really blame the law enforcement for obliging?
Well, from a humanitarian point of view, of course you can, but in countries that cannot promise any sort of prosperity for decades to come, law enforcement are easily corrupted because their government, and economy, offer literally no other means of obtaining substantial wealth. 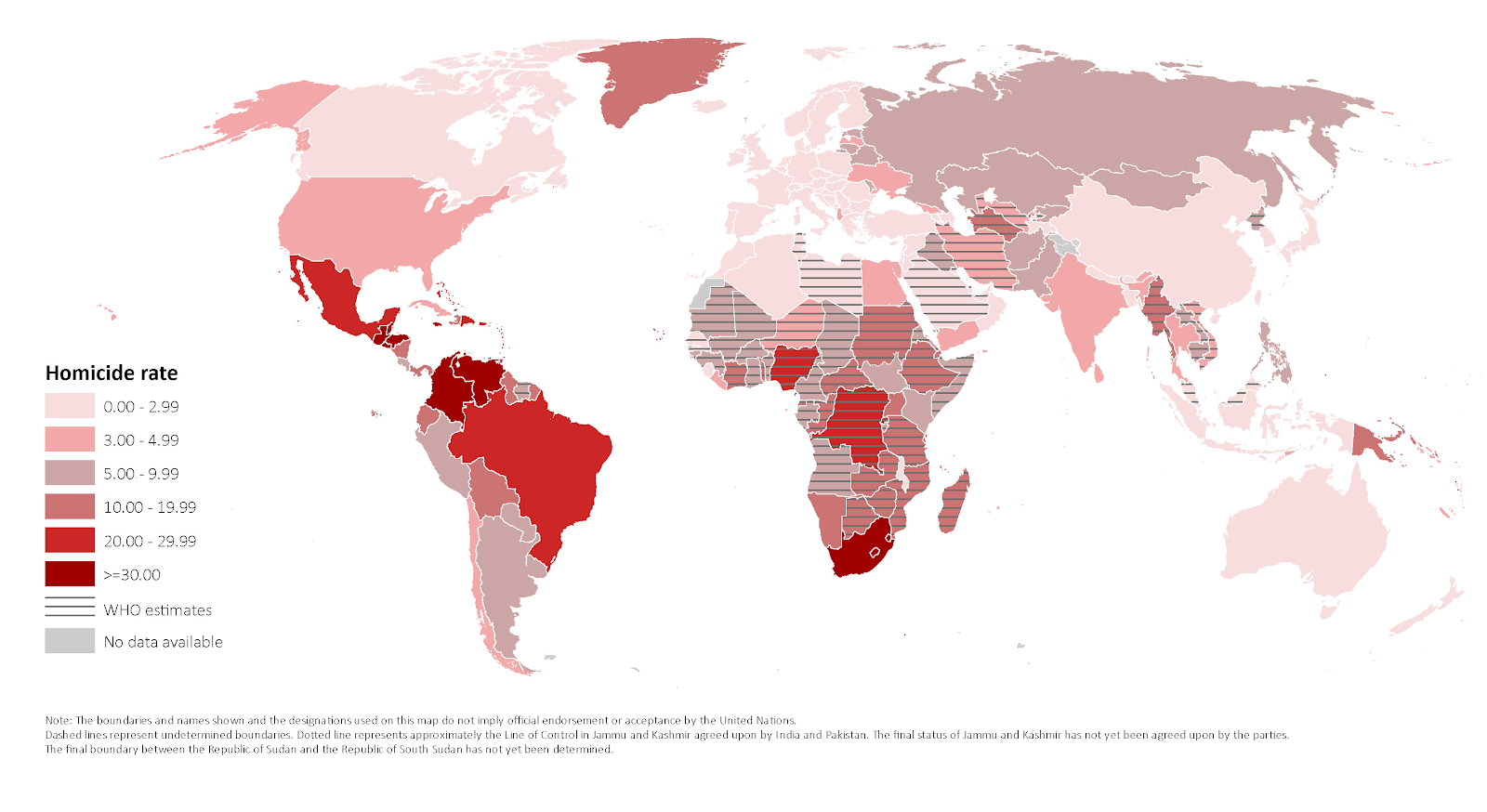 If you observe the diagram above, it is interesting to note that the poorest countries in the world do not, in fact, have the highest crime rates. This is due more to geographic factors than economic reasons, but it is interesting to observe.
The main reason why crime is greatest in South America is because the U.S. has the largest illegal drug market on the planet. Match that with Central and Southern American countries that have naturally terrible economies, there is a great economic opportunity for them to live comfortably by producing and shipping goods to the U.S.
See, although Africa is much poorer than countries residing in Southern America, they don’t have the infrastructure or the neighbouring markets needed to produce massive amounts of drugs and ship them off. However, this doesn’t deny the fact that crime in Africa is abundant. It may not thrive off of the illegal drug market, but homicide and kidnappings still plague the continent.

With all this being said, what exactly makes a country rich?

The four points above dictate what a country must do with its resources to build a strong base for success, but they are not generally what generates wealth, as you need wealth in order to stimulate things such as education, infrastructure, and health care.
So how does a poor country go about generating wealth?
First, it must be able to export. A country that imports more than it exports incurs a trade deficit. Although this can be acceptable for short periods of time to stimulate growth, if you have nothing to offer the international market, you will never be considered sustainable.
Second, you must put money into the hands of the lowest wealth percentile – you must build up your economy from the bottom. Now you may be asking, how does a third-world country go about doing this? They accomplish this by incurring a debt. They borrow from wealthier countries with the promise that several decades in the future they will pay them back. However, this cannot be accomplished if that country cannot export.
Third, once the poorest percentile has some form of wealth, they must use that wealth to invest in their futures. They must use that money to help put their children through education, and their children’s children. The idea of education is that once completed, kids will be able to give back to the economy, and thus, repay their debt to the government through taxes.
Once you have generation after generation of kids going to university, and you have the number of kids going to school increasing each year, you are on the right track. Having an educated workforce is essential for any country to reach economic prosperity, but this is something Africa has not yet achieved.
See, Africa at one point was one of the richest places on Earth. During the reign of Mansa Musa – the richest man in history, the Mali empire controlled a large portion of gold flowing through the northern parts of Africa and into Asia. During this time, some of the world’s first universities and advanced political institutions were being put into place.
However, as history goes, the death of this great ruler saw the decline in this great empire, and a transfer of power to the middle-east and Asia. Since then, Africa has not been able to gain economic foothold due to hanging onto traditional beliefs. Native Africans did not believe in large-scale imperialism and colonization like the Europeans did and thus, their economies did not reap the benefits of the industrial revolution. 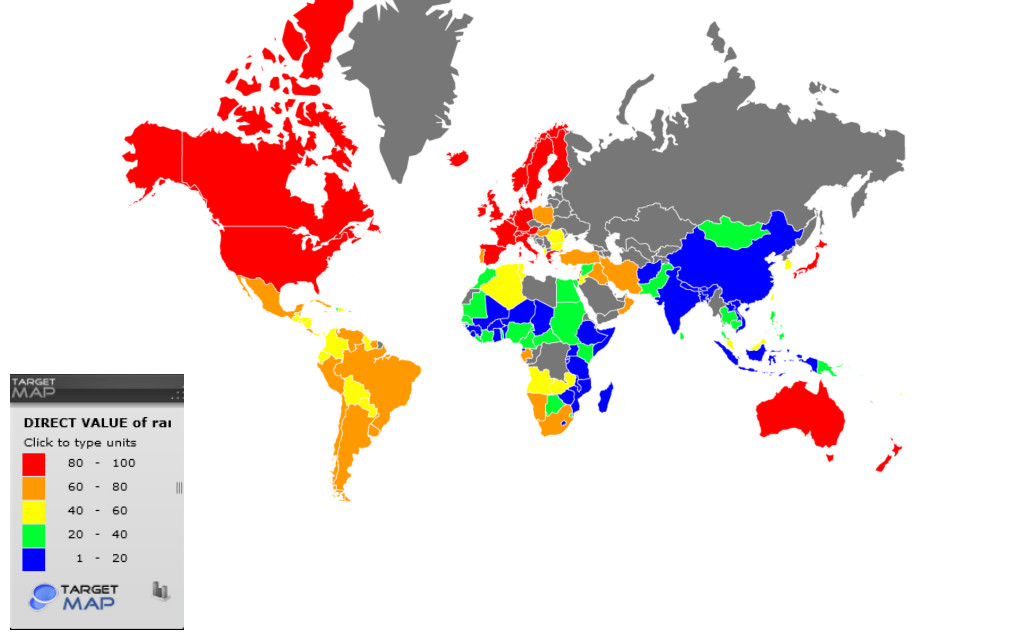 If we look at the above diagram which indicates GDP per capita across the globe we can see that Africa and Eastern Asia are the clear candidates for the poorest nations on Earth. GDP per capita basically dictates how much wealth each person attains on an annual basis in a country. It is generally a more accurate depiction of social wealth within a country because it accounts for wealth disparity.
The usual suspects for high standards of living can be visualized in this diagram. Naturally, countries such as Canada, the U.S. Australia, and several European countries boast substantial per capita wealth, and subsequently, higher standards of living.
This is because Europeans were the first to reap the benefits of the industrial revolution, and they were the first to establish advanced economies. The 16th and 17th centuries saw mass-scale colonization of the west, where Europeans stole the North American continent from the Native Americans and began life anew – setting up either French or Spanish controlled areas that grew substantially over time.
Canada and America are rich today because they were colonized by wealthy Europeans and were able to quickly established political, and economic systems that still stand to this day. Furthermore, their resources have not been largely depleted like countries in Africa and Asia, and they have relatively low populations that can thrive off of free-market economies.
Technologies, infrastructures, militaries, education and well, economies in general, are sound in countries that geographically are not in the centre of the globe.
Because of history, countries that reside in the middle of Africa and Eastern Asia are subject to a lack of prosperity for years to come. Their infrastructures have not advanced nearly as fast as those in Europe and the west, and their poor state in 2016 shows this.

What does the future hold for poor nations?

For a poor country to become rich in 2016, they must start from the bottom. But when corruption flourishes, and exports are sparse, this is nearly impossible. Pair this with populations that are rising faster in Africa and Asia, and you have a nearly unsolvable problem.
Poor countries in this day in age will never become rich if they cannot offer something to the rest of the world. Countries in Africa indeed have natural resources, but there are much larger social issues lingering that block them from tapping into these resources and actually offering them to the world. So what happens? Rich Western countries go into these areas, tap into their gold resources and bring them back home.
Poor nations (based on GDP per capita) that reside in southern asia however, will prosper in the coming century. GDP per capita is steadily rising in countries such as South Korea, China, and India, partly due to trade agreements such as BRICS, which aim to promote trading among India, China, Russia, Brazil, and now, South Africa. The thing is, each of these countries has something to offer one another, and is exactly why they will reach greater prosperity.
For countries that lack this, the will forever continue to be poor unless they can find something to offer the world.
Facebook Comments

Read More  What Are The Most Economically Stable Countries In 2017?

How Does a Poor Country Become Rich?

Could globalization Be Detrimental To Developed Countries?

Why does medicine cost so much in the U.S?