Do you ever look up to the sky and observe the ‘beautiful’ white clouds left behind from commercial jets? Do you ever question why those are there? Or what they could potentially be doing to our atmosphere? I do.
We’re living in a day in age where climate change is more profound than ever before – change in human behaviour must occur now if we are to save our planet for generations to come. That is why I try my best to observe the world around me, with the goal of pointing out the seemingly obvious; climate change is happening everyday and the effects are right in front of our eyes.
With this article, I want to determine the potential harmful effects that these so called, ‘chemical trails’ are leaving behind. Considering that there is no shortage of conspiracy theories on this issue, it shouldn’t be hard to find information that argues the deadly effects of this carbon emission, so I want to keep my research more based on science rather than conspiracy.
So let us see, what effect do ‘chemical trails’ have on our fragile atmospheric environment?

What is the science behind condensation trails?

It is imperative that we first understand why there are clouds left behind moving jets before we make any rash conclusions that support conspiracy theories.
Jet engines spew out very hot air. Because water vapor is one of the byproducts of the exhaust, the air is also very humid. However, high in the atmosphere where these jets fly, the air is typically very cold — often lower than -40 degrees Fahrenheit. Additionally, the atmosphere up there is often of low vapor pressure, or the force exerted by a gas on the surrounding environment.
When a jet engine is spewing out hot, humid air into an atmosphere that is cold and has low vapor pressure, the result is condensation. The water vapor coming out of the engine quickly condenses into water droplets and then crystallizes into ice. The ice crystals are the clouds that form behind the engine. This is why the streaks are called contrails, short for “condensation trails.”
To help explain this phenomenon, scientists link it to seeing your breath on cold days. You may have noticed that puffs of breath dissipate quickly on drier days. The same is true of contrails: When the atmosphere is more humid, the contrails linger, but when the atmosphere is dry, the contrails disappear more quickly.
The work of author and airline pilot Patrick Smith explain exactly how the ‘chemtrail’ works and why it is even a conspiracy in the first place.
Smith details how contrails consist of not just ice crystals and water vapor but also other byproducts of engine exhaust. These include carbon dioxide, nitrogen oxides, sulfate particles and soot. Some point out that these, in addition to the extra cloud cover, can have negative environmental effects.
Not to mention, the conspiracy theorists have nicknamed contrails “chemtrails” under the suspicion that the government is taking advantage of this scientific phenomenon to secretly release other substances into the atmosphere – but I’ll get into that later.

What is the impact Contrails have on the environment?

Condensation trails are interesting to observe because almost no matter where you are, if you look up, chances are you will see them. When I look up in the sky and see rows and rows of these jet engine trails in the sky, I can’t help but wonder what affect these man-made clouds are having on the atmosphere. 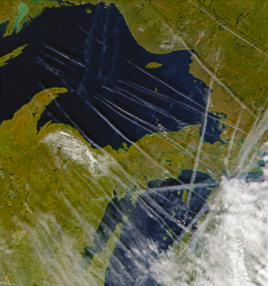 As explained by Meteorology, by the University of Wisconsin, “Contrails are a concern in climate studies because increased jet aircraft traffic may result in an increase in cloud cover over certain regions.” They argue moreso that it is the cloud cover itself rather than the chemical fumes being spewed into the atmosphere that is having a more profound impact on our environment.
This argument makes sense; the more clouds that are in the sky, the less our sun can radiate heat to the ground, which will see a drop in temperatures. It has been estimated that in certain heavy air-traffic areas such as over Chicago, cloud cover has increased by as much as 20%. An increase in cloud cover changes the region’s radiation balance. So, as I just explained, solar energy reaching the surface may be reduced, which can result in surface cooling. Conversely, clouds can also reduce the terrestrial energy losses of the planet by absorbing energy emitted by the surface, which can result in warming.
For the most part, the large environmental impact from condensation trails is in fact, temperature increases, or global warming. Throughout my research, I did not find any credibly scientific backing that proves the existence of ‘chemtrails’: the conspiracy that argues government-induced poisoning of the public and the environment by placing deadly chemicals in aircraft fuel.
Even just trying to describe this insane conspiracy has me doubting its credibility. But, I have an open mind, and I will try to find out what exactly this whole conspiracy is about.

So what is the Chemtrail Conspiracy?

A U.S. Environmental study on Contrails reveals that they are in fact, not harmful to the environment. I don’t necessarily trust this source, because, well, I don’t really trust anything uttered by the United States government, but this report does an exceptional job of detailing exactly what contrails are, which can be deemed as something not entirely important in the climate change discussion.
Yet, despite many scientific studies being done on this issue, conspiracy theorists still argue the dangerous effects of condensation trails.
One of the more extreme theories says that the government is intentionally spraying people with harmful substances in order to experiment with the effects — or even to “weed out” the sick and elderly. However, many reputable scientists dismiss these theories on the grounds that such experiments would be of no real use. The “chemtrails” would be released so high in the atmosphere that unpredictable winds would move them around significantly, making such experiments worthless and unreliable.
Others believe the government could be experimenting with weather manipulation, which was actually accomplished by the British as early as the 1950’s, where they were able to successfully “seed” clouds with salt, dry ice and silver iodide to make rain.
The theories continue, but without much of any proof, and in the foreseeable future, I cannot see a possibility of the United States government releasing any information regarding possible ChemTrail participation. So, although it is great to question everything, conspiracy theories like these are just theories; they are extremely difficult to prove with fact, which leaves them ineligible for any serious inquisition.
However, this doesn’t deny the fact that the future for air travel could see some turbulence thrown its way in the form of environmentalists. Whether you dispute conspiracy theories or not, science is science, and as air traffic increases over the next few decades, the condensation clouds spewed out by these planes will have an impact on our environment.

How do commercial airlines plan to decrease condensation trail emissions in the future?

It’s basic economics; they don’t. According to a report by the British Environmental Audit Committee, one of the ways of dealing with radiative forcing due to the existence of condensation trails it by changing flight trajectories and flying lower in order to avoid the atmospheric conditions that create contrails.
But like I said, airline companies do not want to fly lower. You ever wonder why planes climb to 30, even 40,000 feet? They do this because it saves fuel — a lot of it. Just like coal companies don’t care about burning coal and oil companies don’t care about drilling oil, commercial airlines don’t care about condensation trails because they don’t make them money; rather, they only hinder their ability to make profits.
This is my problem with what business has come to in this world. Money is prioritized over the environment, which means sanctions that forbid contrailing are not profitable, and are extremely hard to implement because of government lobbying. There are so many business interests in federal governments across the globe that for something like this to happen, you would need to start from domestic political structure and move out from there. I simply can’t imagine a government putting a ceiling on how high commercial jets can travel at because, well, there are owners of commercial jet airlines that work within parliament.
The science states that flying lower can limit the environmental impact caused by condensation trails. So, in a day in age where climate change is more important than ever, will airlines take into account their environmental footprint? Or will profits reign above everything else like they have for so many years?
Only time will tell.
Facebook Comments

A Breakdown of the Ukraine-Russian Conflict