In mid-December, the Venezuelan government surprised its citizens by withdrawing from circulation the 100-bolívar note, its largest and most used bill, with only 72 hours’ warning.
Lower oil prices and hyperinflation have had wide-reaching consequences for the entire population, which include government imposed limits on food supplies, electricity blackouts, and water droughts.
The deadline passed without the promised new larger denominations having arrived, officially turning all 100-bolívar bills — over three-quarters of all cash in circulation — into worthless pieces of paper, and causing looting and disorder to ripple through the country’s streets.
After days of economic chaos, with some stores refusing to accept the bills and long lines at banks ending in frustration with A.T.M.s dispensing the same 100-bolívar denomination that having been deposited, President Nicolás Maduro reversed course, announcing that the note would continue to be honoured until January 20th 2017. 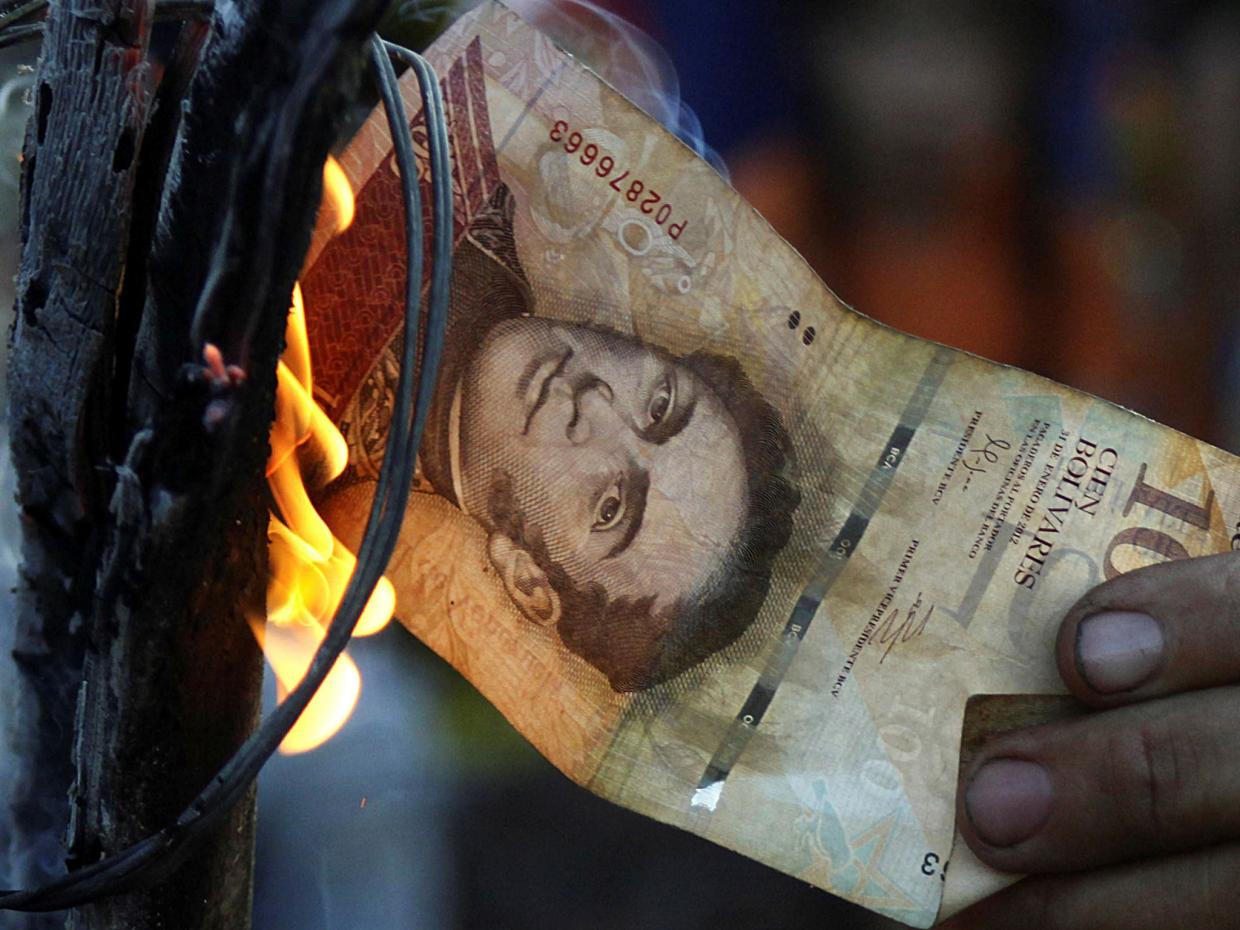 [A man burns a 100-bolivar bill during a protest in El Pinal Carlos Eduardo Ramirez/Reuters]
As the nation’s most widely used bank note went out of circulation, the higher-denomination bills that were supposed to replace the 100-bolivar note had taken days to arrive at banks or cash machines. That forced people to rely on credit cards and bank transfers or to try to make purchases with bundles of smaller bills often worth less than a penny each.
The issue can be broken down into several main causes:

Venezuela has a government-set two-tier exchange rate system for its national currency, the Bolivar.
The Bolivar has one exchange rate for what the government determines to be ‘essential goods’ and another for ‘non-essential’ goods.
Essential imported goods (food, health, education) get a better rate of Bolivars to the U.S. Dollar than non-essential goods (Entertainment, luxury clothes, expensive cars, etc.).
While no official statistics are being kept, the black market (free market) values the Bolivar at near worthless, irrespective of where the Venezuelan government sets the Bolivar exchange rate.
The Venezuelan Bolivar is at its state of near worthlessness because the government is broke and has been talking about explicitly defaulting on its estimated $185 billion in external debt.
Venezuela no longer has the option of just printing more Bolivares to pay off its debt now, due to their currency being near worthless. Defaulting might eliminate a source of financial stress, but would result in a further loss of confidence in the Bolivar and ensure that the Bolivar remains near worthless.Venezuela’s foreign reserves – which consist of U.S. Treasury Bonds and gold – are valued at around $12 billion, down from about $42 billion in 2008. Since current government revenues, mostly derived from its oil exports are not sufficient to meet its debt obligations, Venezuela has been forced to sell most of its reserves, including its gold reserves.The decline in the value of the Bolivar has made it prohibitively expensive or impossible for the government to pay for products, causing shortages and consumer prices to skyrocket.

Socialism has two relevant features: Central planning of the economy by political powers and the public provision of common goods (as opposed to public goods such as national defence and judicial systems).
This is distinct from welfare-state policies such as those found in the United States, Canada, and Europe. Sweden has a vast and expensive welfare state, but it has a robustly capitalistic trade-driven economy that in many ways is more free-market than our own, with lower corporate taxes and fewer trade barriers.
The difference between welfare programs and socialism is the difference between food stamps and the state-run groceries that were the bane of the common people’s existence in the old Soviet Union and modern Venezuela. The former is imperfect, the latter catastrophic.

Chavez’ handling of this situation has been far from ideal – mainly due to his socialist beliefs.

He has seized large swathes of farmlands he claimed only served “the devil’s interests”-much like Paster Mugabe. Problem is much like Mugabe, he also uprooted something he could not replicate or reproduce. Agricultural production plunged, need for imports increased, people began bidding up the price of scarce goods as a way of dealing with unfavourable terms of trade and falling domestic production, price controls were put in place to tame inflation.

Problem is, retailers began taking items off the shelf to create artificial scarcity and make under the table sales to the highest bidders. Others targeted products that weren’t subject to price controls and increased their price to make up for what they saw as losses in price-controlled goods. Retails also caught fire as merchants and grocers played off real and artificial scarcity to survive in a heavily regulated environment.

A National Guard officer standing outside a grocery store looted by neighbours the night before in Ciudad Bolívar,

The Socialism era was ushered in with the election of Hugo Chavez in 1999, and later, began its reign over Venezuela with the establishment of the United Socialist Party of Venezuela in 2007.

Read More  Which Countries Will Have The Highest Standard Of Living In 30 Years?
The introduction of the Socialist platform, as well as the Bolivar Fuerte, saw a massive jump
in the money supply within Venezuela (pictured in the graph below).
The Socialist-inspired government of President Hugo Chávez instituted strict currency controls in 2003, creating an official organization that decides who is allowed to exchange bolívars for dollars.

The current incarnation of the bolívar is also known as the “bolívar Fuerte,” a redenomination that replaced the previous bolívars at a rate of one to 1,000 in 2007.In a country where roughly a third of the population lacks a bank account, cash transactions are a critical part of the economy — especially for the poor. It is illegal to publish the free-market value of the bolívar in Venezuela, so people rely on an online exchange rate, run by an ex-colonel turned hardware salesman in Alabama, that tracks black market trading in the Colombian border city of Cúcuta.
Amongst the many problems in Venezuela (shortage of necessity goods like toilet paper and food) we can visualize a calculation of the inflation rate in Venezuela: an eye-popping 808%.
Now, we can’t directly observe the inflation rate as no one at all is keeping the usual proper and accurate records of what prices are in the country. The last time the government did so was back in 2014 which is all a bit out of date. So, we need to look at a proxy and black market exchange rates do that for us nicely (pictured above).

Ukraine does have some excuse really, considering that Russia has taken the eastern quarter or third of the country and they are on the brink of a massive conflict with the Eastern Power.
Syria similarly can be justified a high inflation rate: it’s in the middle of a bloody civil war. But Venezuela? There’s no cause for this other than the sheer blinding incompetence of the people making economic policy. And it comes to rather a thing when we have direct evidence that the implementation of dim bulb socialism is worse for a country than actual civil war.But it’s important for us to note quite what it is that they got wrong. There’s nothing wrong with the idea that perhaps the country was a bit too stratified, perhaps a bit unequal. There’s also nothing wrong with having a political goal of trying to sort that out a bit. The problem is always going to be the manner in which you attempt to do so.
We can think of two ways in which we can sort things out. The first is that welfare state alternative. Tax some portion of the economy (and for Venezuela, this would have been easy, just use the oil money) to give money to the poor people. Then they will have more money and will be able to go and buy things in the marketplace just like everyone else. Great, problem solved, done and dusted.Or we could do what Venezuela did which is go mess with the markets and prices. And that method ends up in the disaster we see before us. Price fixing simply doesn’t work. For, if you fix the price below the market clearing price then you will have shortages as Venezuela does, and if you fix the price above that market clearing price then you will have surpluses.
You can’t fix the price at the market clearing price because you’ve got to use the market process to work out what that is: and even if you could, why would you bother?

To conclude, I believe the Socialist economic reign in Venezuela is the reason for the hyperinflation of the Bolivar. If the Maduro-led government had followed market-based protocol and used oil exports as a means to fund the poor and boost economic activity, this issue would not have gotten so out of hand. Furthermore, the means in which Maduro has implemented the Bolivar discontinuation is unjust; to only give the public 72 hours notice means you are putting many lives in jeopardy, and making theft and other crimes more accessible.

The Socialist regime in Venezuela created a weak currency that was subject to corruption, which is why this issue escalated so quickly. When oil prices went down, Venezuela started to use their dollar reserve to continue paying for the price scheme. They also increased the money supply and borrowed on the financial markets. This is not sustainable and is what led them to this hyperinflation catastrophe.

On Thursday, President Maduro appeared again on state television to announce a second extension of the life of the 100-bolívar bill for an additional 18 days, until Jan. 20. With luck, the new bills, ranging in value from 500 to 20,000 bolívars, will have been made widely available before then.

But printing larger denominations doesn’t help reverse an episode of hyperinflation. And Venezuela’s on a ticking clock. Because the rapidly devaluing bolívar is not widely accepted outside the country’s borders, in order to continue to borrow the money required to keep the nationalized oil industry pumping, the government must pay its foreign debts with dollars. According to data from the Central Bank of Venezuela, the government held $43 billion in foreign reserves at the beginning of 2009. Only $11 billion is left today.