In the Islamic Republic of Iran, history is brewing. President Hassan Rouhani of Iran won re-election to serve a second term in the country. Once again after France and South Korea, Iran has chosen a politically moderate leader defying the right-wing populist wave in many ways. What does Rouhani mean for Iran? More importantly, what does Rouhani mean for the rest of the world?

According to the BBC,

This was a revenge of the people against the hardliners who intimidated them, jailed them, executed them, drove them to exile, pushed them out of their jobs, and discriminated against women.

Rouhani rode the wave of success in his first-term to target the same demographic with similar promises as before. As seen in most middle-eastern elections, the emphasis of proposed decision-making was on economic growth and industrialization.

As many experts have put it, Friday’s election was a  referendum on Rouhani’s politically moderate policies. This primarily includes the landmark Iranian nuclear deal which lifted heavy Western sanctions on Iran that had been largely hindering economic growth in the country.

While Rouhani achieved the goal of reaching the nuclear deal- the decision has yet to translate into considerable economic output. Sanctions will be removed gradually as the Iranian nuclear deal runs its course over the next decade. Further, there are other sanctions hailing from decades in the past that need to be scraped as well.

International outreach was another prominent issue in the election. Iranians strongly believe that the international image of Iran in the world is key to its overall prosperity. With foreign policy an important agenda on the election, Iranians are recognizing the potential of cordial relations with the rest of the world. In the last few weeks, Rouhani mended ties with the European Union and much of the Western world. 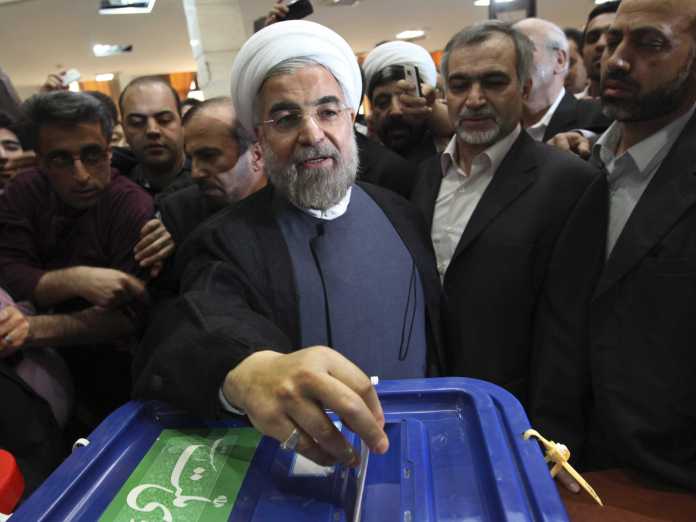 It was on these very promises that Rouhani has been re-elected. However, as old problems are resolved, new ones surface.

As Rouhani gets elected, he will face a myriad of problems.

The first of which would be Donald Trump.

Trump embarked on his first foreign visit by going to Saudi Arabia recently where he signed an arms deal worth $110 billion. This spells obvious problems for Rouhani who is faced with tough opposition in Syria, Yemen and even underground militias and rebels. Facing an unpredictable administration like Trump becomes even worse when faced with a population so watchful of foreign policy like the Iranians.

Rouhani can’t possibly afford to play his cards wrong on the foreign stage as that would mean possibly losing the next election to a conservative right-wing politician who would “set the nation back 20 years”, in his own words.

Despite high voter turnouts, the Iranians seem to be far from content with Rouhani’s economic policies. Economic output growth has barely started to trickle in after the nuclear deal. The full effect of the absence of sanctions is yet to be seen. Moreover, Rouhani’s promises of “Westernizing” Iran are far from complete. The people are eagerly waiting to see their economy open up to more foreign businesses and investments- a promise which remains unfulfilled since 2013.

Should Rouhani fail to satisfy the same demographic he targeted before getting elected, any moderate or liberal reform would remain distant from reality.

Mainstream political pundits would begin ostracizing the administration only after a few weeks, however, to deliver truly on his promises, it would take Rouhani far longer. Most economists and diplomats would agree that large-scale economic reforms and foreign policy goals take years if not decades to achieve.

Until the next crisis in the Middle East, Rouhani should take every opportunity he can to convince all Iranians that he will, in fact, bring prosperity to Iran because like every international election in the last few years-

The election is over, but the nation remains divided.

This article was originally published at www.theyouthjournal.com .

Read More  Will Donald Trump Prove To Be A Good President?