The Golden Triangle; a name synonymous with violence, illegal drug cultivation, and trafficking, as well as an economic crutch for the impoverished citizens living in and around this infamous region.
The Golden Triangle is a region overlapping the rural mountains of Myanmar, Laos, and Thailand. It is Southeast Asia’s primary opium-producing area, accounting for nearly a quarter of the world’s opium This makes the Golden Triangle the second largest opium producer, after Afghanistan.
Opium poppy cultivation in the region has tripled since 2006 and remains the primary means of subsistence — and the drug of choice — for farmers in many parts of rural Myanmar and Laos, according to a new UN report.The United Nations Office on Drugs and Crime (UNODC) estimates that cultivation in the two countries rose marginally this year, up to 63,800 hectares from 61,200 hectares in 2013. The vast majority of that production — which yielded an estimated 762 tons of opium and, after refinement, 76 tons of heroin — took place in Myanmar’s Shan state.
The Golden Triangle’s rural, mountainous landscape is poorly patrolled and mainly governed by armed rebel groups who have interests in the opium trade, making it difficult for the military’s and governments of the region to intervene. Golden triangle governments intervene by deploying their own militaries to the region. However, state-backed militia members often traffic drugs themselves and enjoy legal immunity from prosecution.
Corruption and violence plague the poorer south-eastern nations, which makes cracking down on opium trade a daunting task, especially when militaries are being bought off. This poses an issue: How will these areas go about fighting against illegal opium trade within the ‘Golden Triangle’?

How Did the Golden Triangle Emerge?

Along with Afghanistan in the Golden Crescent, the region has been one of the most extensive opium-producing areas of Asia and of the world since the 1950s. Most of the world’s heroin came from the Golden Triangle until the early 21st century when Afghanistan became the world’s largest producer.
Myanmar, Laos, and Thailand are all historically poor countries with little industrialization and nation-wide poverty. 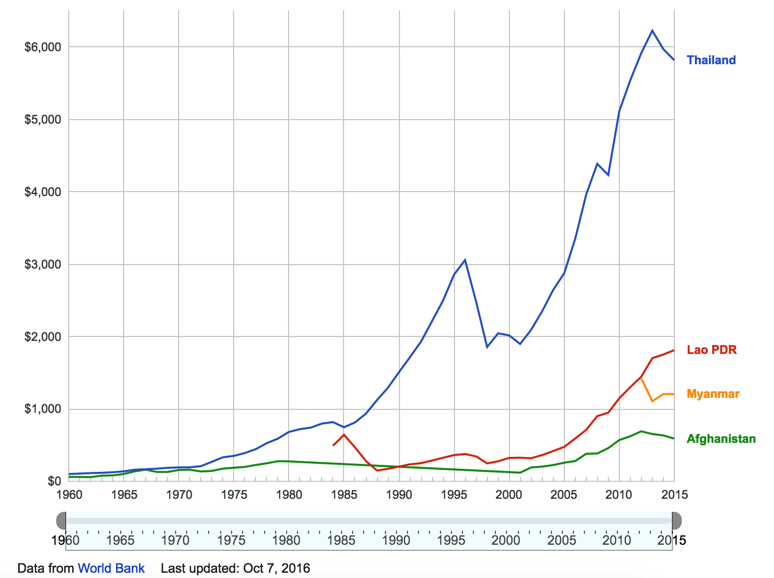 If we look at GDP per capita ($US) from 1960 onward, we can see that the three top opium producers in the world, (LAO, Myanmar, Afghanistan) are barely above the global poverty line set at $700 a year per person. Given this, it is not surprising that these countries are producing so much opium. The drug itself is easy to grow, but to be profitable, it requires a lot of land that cannot be accessed regularly by authorities – something that is abundant within the triangle.
Residents of these regions can make a living farming regular goods, but with authorities hesitant to take action, it is more profitable for them to keep cultivating opium. The average household in Myanmar not growing opium poppies in 2014 earned around $1,730, those who grew poppies made about 15 percent more —$2,040 according to the UN’s estimate. When you consider that 37 percent of the nation’s population are unemployed and an average of 26 percent live in poverty, it is hard to blame them for cultivating opium in the first place.“These are extremely poor areas of Myanmar,” Jeremy Douglas, UNODC’s representative in Southeast Asia and the Pacific, told VICE News. “Until those people get better connected to a large development plan, they aren’t going to have much chance to move away from this economy.”

Even with Opium Cultivation Illegal in the Region, Why Does Production Persist?

The economies of Myanmar, Thailand, and Laos have been struggling for years now. They lack any major industries that can support a workforce, which forces many citizens to partake in opium production. Opium exports account for an estimated $1- $2 billion dollars per year in Myanmar alone, making them the country’s second-largest export after petroleum gas. Thailand and Lao, on the other hand, are more invested in the trafficking of the drugs rather than the cultivation. 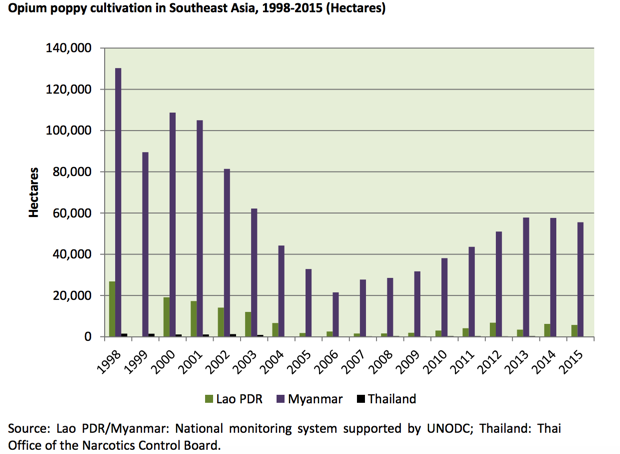 We can visualize this with the graph above, which depicts Myanmar as the leading producer of opium, with Lao PDR behind. We can also see how poppy cultivation in the country decreased more than 80 percent from 1998 to 2006 following an eradication campaign in the Golden Triangle. The number of hectares used to grow the crops increased 29% in 2007, and has continued with steady growth up until the past three years, where growth has, “stabilized”.
The reasons for this surge in opium production? A United Nations report cites corruption, poverty and a lack of government control as causes for the jump.
In an interview conducted by the UN, Jason Eligh, a UNODC Myanmar country manager, explained, “At the root of the problem are conflict and poverty. This is exacerbated by poor access for farmers to arable land, in many cases due to land confiscation schemes, and spiralling household debt as a result of farmers borrowing money from informal lenders at high rates of interest and being unable to meet the harsh repayment terms.”
He goes on further to explain how, “Myanmar has no domestic chemical industry, but is located between two of the world’s largest in China and India. Myanmar would not have a thriving domestic drug industry without massive amounts of precursor chemicals. Acetic anhydride is the chemical necessary to transform opium into heroin, and ephedrine and pseudoephedrine are significant chemical components for the production of methamphetamine.”
Thus, the smuggling of these chemicals into Myanmar from neighboring states is a significant enabler for the industrial scale illicit drug production found in the country. Furthermore, the role that armed militia groups play in protecting the region is huge. Although there are military’s established around the region, setting foot on poppy production land could cost many lives – something the Myanmar government would like to avoid.
Another origin of the rise of opium production in the area can be attributed to the rise in demand for heroin within south-east Asia and around the globe.

What Does the Future Hold For This Region?

Although growth has stabilized in recent years, illegal opium production will continue to persist unless they see foreign government and militia intervention. There is simply too much corruption and a glaring lack of any economic or social structure that will allow for another cease of opium production like what we saw in the 1990’s.
Since the nationwide eradication effort that saw an 86 percent fall in cultivation between 1998 and 2006, poppy growing in Myanmar remains below the peak it reached in the mid and late 1990s, and it shows no signs of stopping.
Currently, the economy of Myanmar is not offering many other means of a healthy way of life for these people, which is why so many have shifted to opium production. And with police forces engaging in actual smuggling of the drugs, there seems to be little to no resistance at this point.
Today, the largest organized resistance to the Golden Triangle’s narco-trade is a Christian vigilante group called Pat Japan. They claim roughly 100,000 members and are known for extreme confrontational measures, like flogging drug addicts and hacking down poppy fields.And even though Pat Japan’s goals do align with those of Western governments, the group doesn’t receive any foreign funding, leaving them largely powerless.
Opium production within the Golden Triangle shows no signs of slowing down, which can only mean one thing: A higher supply of heroin on the global market, and lower prices for opium-based illicit drugs.
Facebook Comments