Overview Of The Greece Financial Crisis

Thousands gather in Greece for protests [Image Acquired from Pdva.be]
The Greek crisis began in late 2009, triggered by the turmoil of the Great Recession, structural weaknesses in the Greek economy, and revelations that previous data on government debt levels and deficits had been undercounted by the Greek government.
So what caused the Greek economy to collapse?
In January 2010, the Greek Ministry of Finance published Stability and Growth Program 2010. The report listed five main causes, poor GDP growth, government debt and deficits, budget compliance and data compatibility. Causes found by others included excess government spending, current account deficits and tax avoidance. 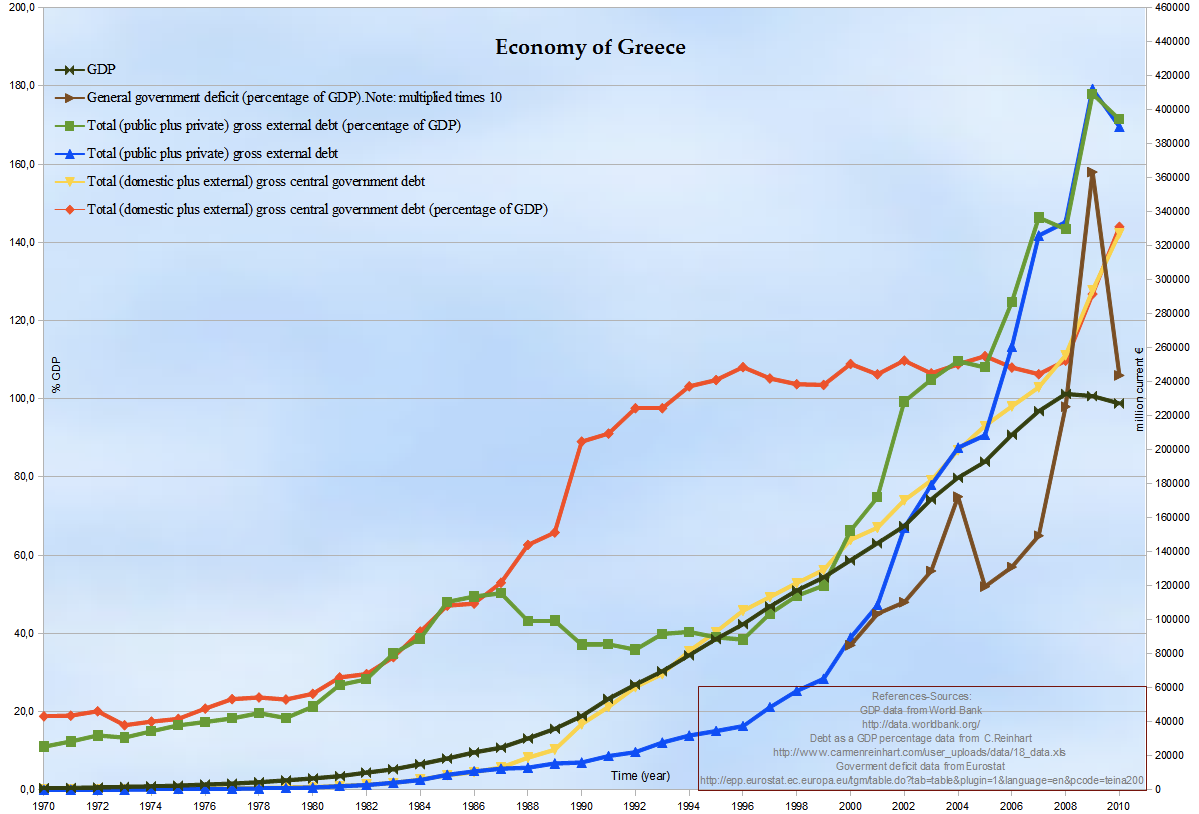 Combined charts of Greece’s GDP and debt since 1970; also of deficit since 2000. [Picture acquired from creativecommons.org]
The Greek economy was one of the Eurozone’s fastest growing from 2000 to 2007, averaging 4.2% annually, as foreign capital flooded in. This capital inflow coincided with a higher budget deficit.Greece had budget surpluses from 1960–73, but thereafter it had budget deficits. From 1974–80 the government had budget deficits below 3% of GDP, while 1981–2013 deficits were above 3%An editorial published by Kathimerini claimed that after the removal of the right-wing military junta in 1974, Greek governments wanted to bring left-leaning Greeks into the economic mainstream[34] and so ran large deficits to finance military expenditures, public sector jobs, pensions and other social benefits.As a percentage of GDP, Greece had the second-biggest defense spending in NATO, after the US – a large contributor to its ensuing debt.
On May 2nd 2010, the European Commission, European Central Bank (ECB) and International Monetary Fund (IMF) (the Troika) launched a €110 billion bailout loan to rescue Greece from sovereign default and cover its financial needs through June 2013, conditional on implementation of austerity measures, structural reforms and privatization of government assets. The bailout loans were mainly used to pay for the maturing bonds, but also to finance the continued yearly budget deficits.
The government enacted 12 rounds of tax increases, spending cuts, and reforms from 2010 to 2016, which at times triggered local riots and nationwide protests. Despite these efforts, the country required bailout loans in 2010, 2012, and 2015 from the International Monetary Fund, Eurogroup, and European Central Bank, and negotiated a 50% “haircut” on debt owned to private banks in 2011.
After a popular referendum which rejected further austerity measures required for the third bailout, and after closure of banks across the country (which lasted for several weeks), on 30 June 2015, Greece became the first developed country to fail to make an IMF loan repayment.  At that time, debt levels had reached €323 billion or some €30,000 per capita.
Currently, the Greece debt totals $176.9 billion, and doesn’t show any signs of improving in future years.
Daniel Munevar of Social Europe, said,

From the perspective of Tsipras, when the unavoidable showdown with the European lenders comes, it is conceivable that Germany would keep Greece in the Eurozone, leaving the IMF behind. Inevitably this would take the issue of significant debt relief off the table. Greece would continue to receive bailout funds keeping it afloat, while pretending to follow the prescriptions coming from Brussels. The Greek people, meanwhile, will continue subsisting in a netherworld of stagnation and poverty.

Economic recovery for Greece is still many years away due to their lack of workforce structure and sizeable nation-wide debts. As of today, Greece’s top industries are tourism and shipping. As the global economy continues to improve, Greece should also see increases in these economic sectors, and hopefully with time, will alleviate the nation’s poverty, as well as their inadequate unemployment rate of 25%.

China’s Economic Ship Is Poised To Sink – The Question Is…

The Challenges Of Creating a “Fair” Economic System In 2017