Home Economics Will BRICS Obstruct Western Markets?
Share on Facebook
Tweet on Twitter
Trade agreement between Brazil, Russia, India, China, and South Africa [Image acquired from businessstandard.com]
Overview
Multilateral trade agreements signify the importance of globalization and economic interdependence in our rapidly-changing world. From the WTO (World Trade Organization) to NAFTA (North American Free Trade Agreement) to B.R.I.C.S, global superpowers are realizing and acting on the importance of free trade, and they are expanding their economies much faster because of this.
B.R.I.C.S is an acronym for Brazil, Russia, India, China, and South Africa; it is a free trade agreement that aims to increase cooperations between member nations to achieve greater development, provide extensive financial assistance, and support various infrastructure and border defense projects.
BRICS Countires [Image Acquired from Felipe Menegaz]
It is much like the European Union and NAFTA, which aim to decrease or eliminate import and export tariffs, as well as to promote the free flow of goods across border countries. The primary driver for, the creation of trade agreements, is the economic model for comparative advantage, which states: the ability of an individual or group to carry out a particular economic activity (such as making a specific product) more efficiently than another activity.
Some countries can produce a greater amount of goods for cheaper than other countries and thus, benefit from trade agreements through decreased tariffs on exports, which allow them to export more significant quantities as well as eliminate trade deficits.
BRICS aims to accomplish greater prosperity by encouraging commercial, political, and cultural cooperation between the five participating nations. So far, it looks like they are well on their way to accomplishing this.
However, with trade agreements comes varying scepticism; Jordan Totten of Forbes magazine has made a bold statement saying, “BRICS New Development Bank threatens the hegemony of U.S. Dollar” but is this the case?

The Concept of BRICS

Member countries have engaged in several summits that began in June 2009, where they discuss future plans for increasing the collective prosperity of the group. 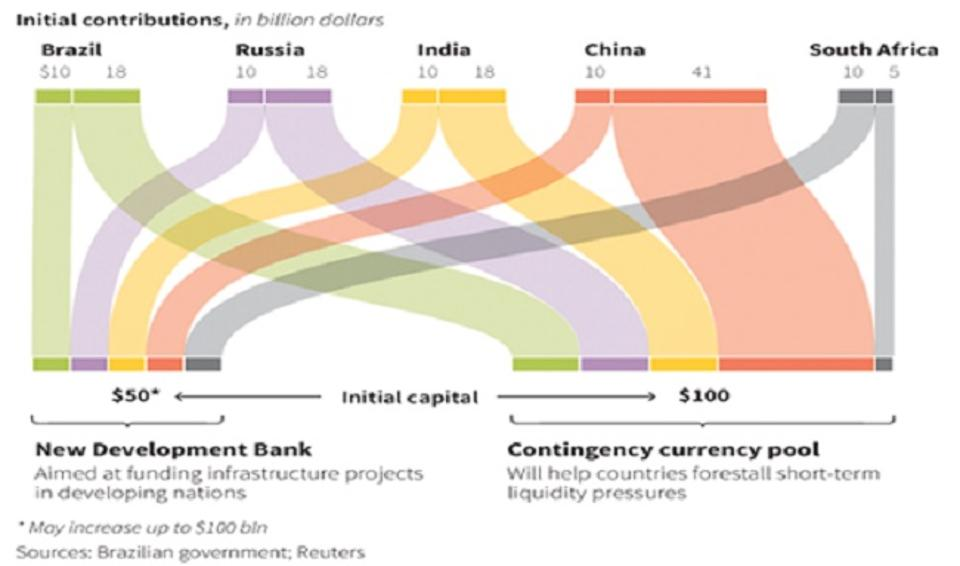 A summit in July 2015, however, proved there is a future for this multilateral trade agreement. Among the several outcomes, three, in particular, stood out.
It is clear that BRICS countries are trying to establish economic sustainability outside of Western-dominated markets, and for a good reason. From 2000 to 2008, the BRIC countries’ combined share of total world economic output rose from 16 to 22 percent. Together, the BRIC countries accounted for 30 percent of the increase in global production during the period.
By investing in their own markets first, they will see substantial domestic growth – something that is paramount to BRICS nations, especially China. China has sustained economic growth for decades and is now in a position to drastically improve their quality of life, rather than have everyone else benefit off of their cheap products.

BRICS members are influential, together, they comprise more than 2.8 billion people or 40 percent of the world’s population, cover more than a quarter of the world’s land area over three continents, and account for more than 25 percent of global GDP.
But just because they have formed a trade agreement amongst themselves does not mean they will not trade with the West. Many countries still rely on the U.S. and Canada for oil, vehicles, machinery, mineral fuels, and plastics.
Some may argue that if BRICS nations can produce these products at a comparative advantage, then trade with the West will diminish.
Read More  How Stable Is China’s Economy?
However, I believe this is an arbitrary assessment of the BRICS trade agreement’s potential global influence. We can expect an increase in trade between BRICS nations and perhaps a decline in trade between BRICS countries and the West, but there is absolutely no way for trade to diminish completely if comparative advantages still exist.
Take the graph above, for example, if India has a comparative advantage over Canada in providing telecommunications services, they will continue to export these services, just as Canada will continue to export natural resources in which we have a comparable advantage in producing.
The only force that can hinder international trade is exemptions on the trade itself – or tariffs.
Canada has yet to impose hefty tariffs on BRICS nations, but the US has hinted at the idea of adding a 45% import ../../../../2016/12/28/brics-jeopardize-north-american-markets/tariff_on_Chinese_goods._If_this_happens___I_don_t_think_it_will.css) you can expect to see a dramatic decline in Chinese imports coming into the US. However, the United States will continue to allow immigration, as well as increase domestic production, which will, in turn, solidify them as a strong economic leader for decades to come.
Aside from this, the BRICS alliance has been interpreted to be a means through which China can exercise its power outside of the U.S.-dominated international institutions. The creation of a dollar currency reserve pool to avoid the need for an IMF bailout may point in this direction.
However, this may be a somewhat biased perspective. China has recently established itself as the world’s number one exporter of goods with exports exceeding $2 billion annually – it makes sense for them to engage in trade agreements that allow for cheaper trade. Furthermore, BRICS countries will benefit from infrastructure projects that will also make trading to the Asian market as a whole, easier.
But with the US, Canada, and Mexico all within the top 20 countries regarding exports, why are people worried about increased trade in Asian markets?
“The most striking sign of the BRICs’ significance to the world economy, is probably their share of foreign-exchange reserves. All four are among the ten largest accumulators of reserves, accounting for 40% of the world’s total. China is easily the largest, with a staggering $2.4 trillion, enough to buy two-thirds of all the NASDAQ-quoted companies.”
The simple reason as to why Western powers are worried is because BRICS nations will not be able to rely on US Debtors or the Western-dominated IMF to bail them out if their economies collapse. By creating a multilateral trade agreement that does not feature any Western powers, BRICS nations have set themselves up for long-term sustainability, which will translate into extended growth with the west as well.
These economic and foreign policy issues are too complex to be viewed as “following U.S. leadership,” or “pushing back against U.S. leadership.” China in the BRICS is attempting to promote the economic and political development of emerging markets, which are by definition not a part of the Western developed-nation group.
China has been separating itself from Western markets for years now; ever since they de-pegged their currency from the American dollar, their exports have risen, and their domestic investment has seen a sharp increase.
Donald Trump believes “They are using our country as a piggy bank to rebuild China, and many other nations are doing the same thing.” Whether this is true or not, BRICS countries are now building their own ‘piggy bank’.
These countries have varying approaches to international relations and do not appear to be operating as an anti-Western body. China in the BRICS Summit acted productively, not only for China but also for other nations. The promotion of economic activity in various global regions helps to generate growth elsewhere, as growth is not a zero-sum game. The BRICS trade agreement should be viewed positively and not as a threat.
Facebook Comments